Here at Swift Calcs, we know we are on to something: the user-interaction paradigm for computational tools, from Matlab to Excel, is cumbersome and outdated. It leads to lost productivity and more errors.

But what should the new paradigm be? With Alpha v0.1, launched in February of 2015, we focused on utilizing a 'what you see is what you get' mathematical entry tool, coupled with visual 'blocks' to perform basic calculations: 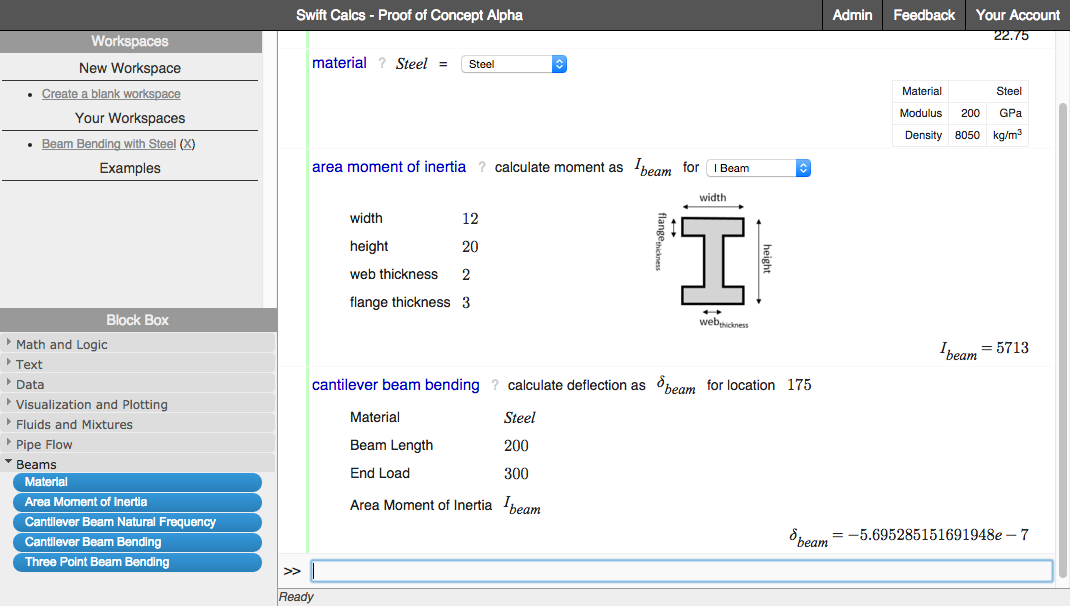 User feedback was decidedly mixed. Sure, folks liked the WYSIWYG entry system, but there were large usability concerns. The UI was not obvious to people, the site was clunky, and the engineering blocks were concerning...people wanted to see what was happening under the hood.

After a long series of interviews and user discussions, we began developing beta v0.2 in April of 2015, and launched the initial version last August. Beta v0.2 was a complete overhaul of the UI, with commonly-used productivity applications used as inspiration for our design. We centered the paradigm around document creation, with built in mathematics support. The same WYSIWYG math entry engine was present, put packaged in an entirely new body: 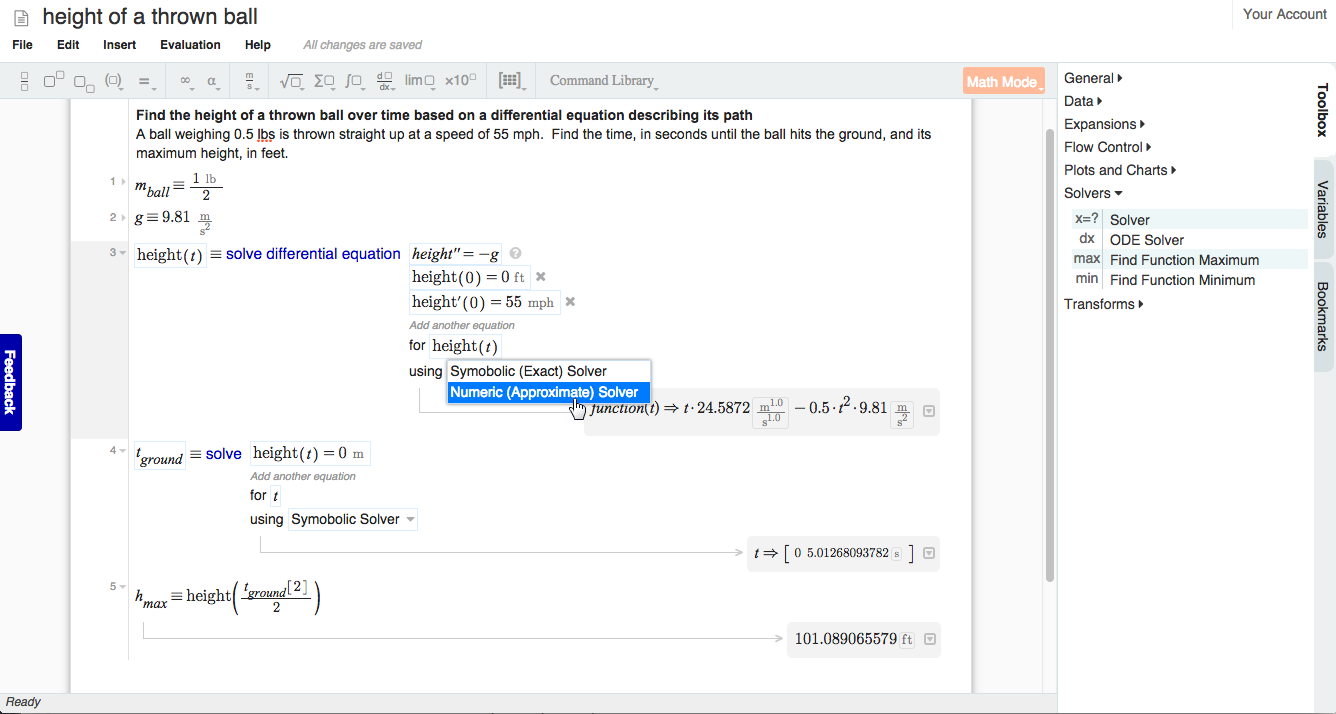 This was the system live until yesterday. Although many users found this version to be useful, interviews and analytics showed us that the UI was still not aligned with user needs. We found a large number of users reporting that they used a single document (often titled 'Scratchpad'), and would simply highlight everything, hit delete, and start again on their next calculation. In short, folks were usually not creating reports or long-form documents in Swift Calcs, rather they were performing shorter-form calculations on the fly, using our easy input and unit handling to do work for them.

Today we are pleased to announce the launch of the newest Swift Calcs iteration, based on community feedback. With Swift Calcs v0.3, we have maintained the same ease of entry, unit support, and in-document editing tools, but updated the 'chrome' (all the stuff around the edges) to better align with user needs: 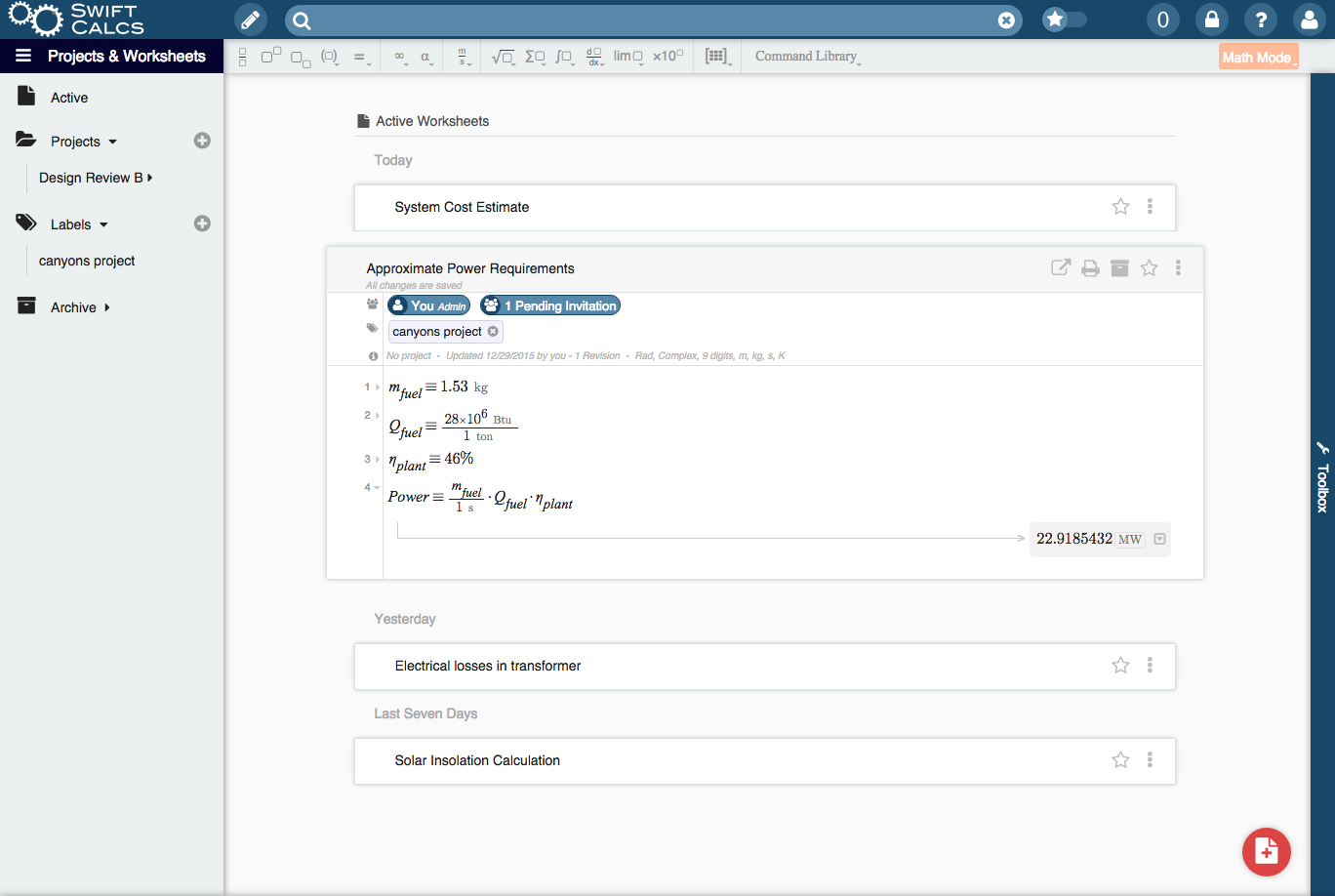 The default Swift Calcs screen is now a set of 'cards', each of which contains a Swift Calcs worksheet. These cards are organized by the date the worksheet was last edited. With this view, you can quickly find calculations you have been working on recently, while older calculations naturally fall to the bottom.

Folders have been replaced by 'Projects'. Create new projects and share them with colleagues: all participants will gain immediate access to all the worksheets in the project. Click project names in the left-hand toolbar to display worksheets from particular projects.

Archive worksheets when you are done with them. The archive button allows worksheets to be hidden from your active worksheets box, but kept in storage in case you ever need to reach back and retrieve them.

Readily create new worksheets. No need to select-all and hit delete to start a new calculation...just hit the big red button in the bottom right of the screen and be on your way.

Let us know how we did!

Have we zeroed in on the perfect computational solution? Maybe...maybe not. We're sure there's room to improve, to iterate, and to refine in order to build something our users, you, love. So let us know what you think, what still needs to be changed, and where we can improve Swift Calcs further.