Celebrate Valentine's Day with these new features from Swift Calcs...you'll fall in love with math all over again!

As outlined in an extensive blog post, we increased the speed of solvers and plots by 5-100x through the use of unit pre-processing and adaptive plotting. The chart below shows computation times for some of our test scripts before and after this update...it's made an incredible impact! Head over to the blog for a full rundown.

The slider is one of the most-used tools in the Swift Calcs toolbox, providing a visual and interactive way to set the value of a variable for use later in a worksheet.

We have now added three more interactive entry tools, all available in the Variables section of the toolbox:

A new interpolate tool has been added to the toolbox under the Data section. Provide a set of x and y data and the tool will return a piecewise function to interpolate values between points. The tool also allows you to choose the order of the splines (linear, quadratic, etc) and whether to allow extrapolation outside of the data domain. 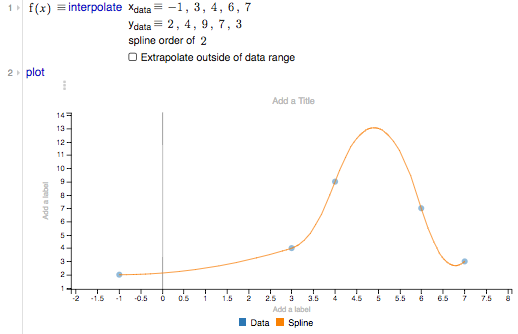 For function plots without pre-set y-axis limits, we've implemented a new sampling algorithm to determine appropriate limits to choose in order to produce a visually useful plot. Previously, we would simply use the maximum and minimum values for the plot, a strategy that fails when asymptotes are present in the plot. Take a look below to see how the plot of cos(x)/x appears before and after the update:

Looking to learn keyboard shortcuts? We've added tooltips to all toolbox tools and menubar items. Simply hover your mouse over a tool or menubar option, and after a short moment a small tooltip will appear with the text shortcut. For tools, you can type the text shortcut at the start of any math mode item to insert that tool, and menubar shortcuts can be used anywhere inside a math mode item.

The best way to transform a Swift Calcs document into a PDF is by using the 'print to PDF' feature available on many computers. Not everyone has this option, however, or it may not be available on your machine. To support conversion to PDF, we've added a Download as PDF option in the File menu. When chosen, the system will generate a PDF of the current worksheet and email it to you as an attachment.

A set of functions for finding values in vectors

Check out three new functions in the command library: closest, closestgreater, and closestlesser, which will return the closest value in a vector to the desired number.

With the release of Swift Calcs Professional and Business, we are now offering support for teams. When you subscribe to a pro or business membership for your team, the team administrator will gain the ability to add or remove users from their team, and users on the team will have a new sharing option to share whole Projects or Worksheets with members of the team.

We've updated our default worksheet listings. You'll now see in Swift Calcs your active worksheets by default, which includes all worksheets you have opened or edited, regardless of whether you created them. You'll also find in the Project list a section titled Created by Me that lists worksheets and Projects you created. If others have invited you to worksheets, you'll see a Shared with Me section, and teams will see Team Projects as well. These new project lists help organize your work and make finding projects and worksheets faster and easier. Finally, we've added support for sorting the worksheet listing by name, as well as the usual date, to help in finding files.

Do you use an iPad with the Smart Keyboard or an external bluetooth keyboard with any iOS device? There is a weird bug where Apple devices don't send non-alphanumeric key presses to the browser window (why? Because Apple). This made Swift Calcs nearly unusable on these devices. Using a workaround described here, we can discern keypresses on iOS by examining the change in a textbox when non-alphanumeric keys are pressed on iOS devices. The end result? External keyboards with iOS now work as expected, opening up a new range of devices to the Swift Calcs family.